Durant Bend is the penultimate hunting, recreation, and historically pertinent property in Alabama today. With 40,000 linear feet of frontage on the Alabama River (about 7.5 miles) the bend in the river comes within 950 feet of connecting at its nearest point. This essentially creates an island and provides a secluded, wild habitat for wildlife and game management.

Timber: There’s approximately $735,974 on the 1221 acres. Interested parties may request updated volumes and a timber stand map has been included in this brochure. On Durant Bend you will find the timber consists of multiple stands of mature hardwoods of every species, some natural regeneration, several ages of pine plantation, and some recent cut over. A little bit of everything!

Finally there are 405 acres of land currently fenced and cross-fenced for cattle and leased out for hay. The hay averages three cuttings per year. Fingers of Hardwood drains create more hunting opportunities for dove and turkey. 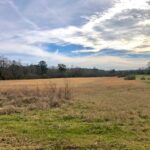